These are not always functional because I'm a masochist and run Arch Linux on my server, and every time Python gets updated, I forget to recreate the virtualenv that runs them for like two months.

Posts a NUT button with a random word on it, every two hours. 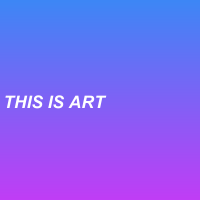 Tweet text at this bot and it will reply with an AESTHETIC image containing that text.

I built this at the end of December 2015, and it blew up and became absurdly popular for a little bit - to the point where its replies would continually get rate-limited by Twitter.

I had to block some users from it and also filter specific words, which was a bit disappointing - but I guess inevitable on the Internet™.

Since this was in the peak Undertale hype period, one silly easter egg I put in was that certain UT-related words would make the bot generate an image using Fixedsys as the font instead of Arial. 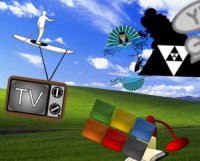 Tweet an image at this bot and it will add random clipart to it and send it back to you.

This was my first image-generating Twitter bot, built using Ruby and RMagick in 2014. I selected an assortment of images from Openclipart and wrote code that would overlay anywhere from 5 to 16 onto an image, at random positions, scales and angles.

I later added automatic tweeting as well, where it would overlay clipart onto random freely-licenced stock images.

I took it down in 2018 because it was continually getting into reply loops with other image-manipulation bots and nobody was actually using it, so I felt like it had overstayed its welcome.