In 2007 I created the first level editor for the first NSMB game (on the Nintendo DS). It was pretty terrible, but better than nothing.

I started learning C# in 2008 and rewrote it for a third time, creating NSMBe4 - which was honestly the first version that was actually usable, since it fully understood the level format and could also render the level graphics.

After a few releases, I made it open-source and eventually handed the project over to Dirbaio.

You can find the latest versions at his website, NSMBHD: nsmbhd.net 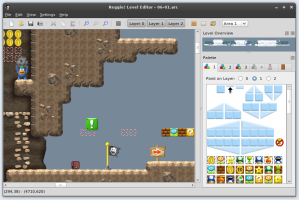 When New Super Mario Bros. Wii came out in 2009, I immediately decided to start building a level editor using the knowledge I had from the DS version.

A few months of development led to Reggie!, which was built using Python and PyQt4 and was actually fairly decent.

I haven't updated it myself since 2010, but there's a slightly scary amount of forks. 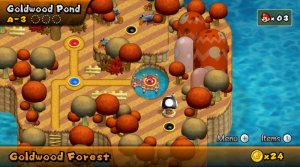 After the announcement of Reggie!, a thread on the GBAtemp forum was started where some people wanted to make a really ambitious mod for NSMBW - the sort of project that never actually goes anywhere.

I was bored one night and joined their chat for a laugh, and ended up sticking around. Against all odds, we actually released the game in 2013 - not exactly as originally envisioned, but it's still a project I'm extremely proud to have been part of.

Some of the things I did for Newer:

Kamek is a toolkit for compiling and injecting C++ code into Wii games, named after the enemy in the Mario series who casts spells - because this stuff is basically magic.

The original version of Kamek was built on an ad-hoc basis while developing Newer Super Mario Bros. Wii, and uses an unholy amount of YAML files.

You can find it in the original Newer repository. Please don't use it, it sucks.

Since 2015, I've been working on a rewrite in C# which is infinitely more pleasant.

It drops the requirement to use the GCC linker by handling linking itself, and lets you specify hook/patch locations directly inside your C++ source files using a crafty trick. The macros add data to non-standard executable sections which Kamek is able to parse when linking.

An unfinished attempt from 2012 at building a viewer/editor using Qt for NintendoWare UI layout definitions. 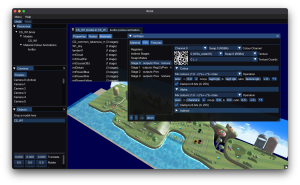 An attempt to build a modern, cross-platform viewer/editor for different kinds of files used in NSMBW, with a focus on visual accuracy.

I made significant progress on Bonk in 2021, but had to put it on hold when I started working again. I'd like to get back to work on it and release it eventually, but it requires far more of a time commitment than I can currently provide.